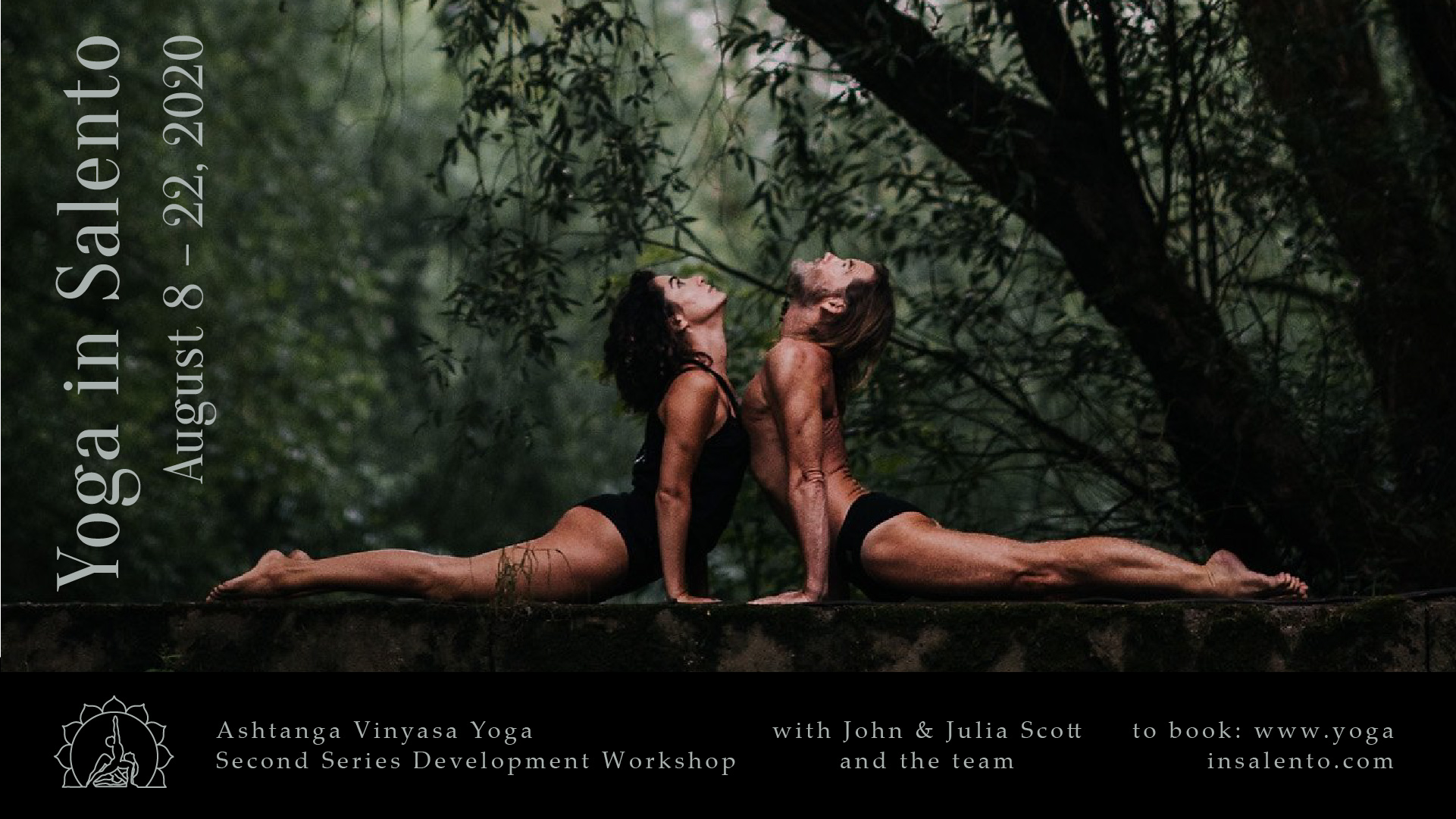 This Two Week Workshop is for all students who have completed the First Series – Yoga Chikitsa* and are wishing to move forward and journey into the Second Series – Nadi Sodana. This Two Week Workshop will also be suited to all those second series practitioners and teachers who wish to take a step back and learn from the beginning the Names, Translations and Sanskrit Counted Vinyasa for all of the Second Series asana.

In the first series of Ashtanga Vinyasa Yoga the student is ‘reintroduced’ to their body, arriving first to Structure and Foundation.  The full practice is hence called “Yoga Chikitsa – Yoga Therapy”. Once established in the structure of the Body, Foundation, Bandha, Ujjayi and Mantra the student is then ready to make an internal but subtle shift of consciousness and literally begin to “Shape Shift” and flow from Human to Animal –

John will begin the workshop revisiting the Primary Series and each day will add one-by-one and pass on to each student, as his Teacher did, ‘The Second Series Count’, as a practice mantra to the student, for the student to hear, recite and learn.

Plus a step-by-step full Vinyasa introduction to each new asana.

Come together as one practice group, grounded, surrounded and protected by the principles of Yoga.  Share in a common intension to focus together, to grow together, blossom and shine together.

Immerse yourself in mantra to discard all distracting thoughts, leaving the ordinary limited thinking mind behind to Flow and Shape Shift from … Grasshopper to Frog, from Frog to Arjuna’s Bow, and from Arjuna’s Bow to King Ustra the Cammel

This intensive leads you to the door of Infinite Potential, ‘NOW’ is your opportunity to ‘Fly’, learn to count, bring your own mind into Deep Focus and Concentration.

Fly above your limited conditioned self and realise the
ExtraOrdinary You!

Guests may cancel or amend any reservation up to 60 (SIXTY) days before the date of arrival for no charge. Payments made will be returned through the same method used for the original payment less any charges incurred by ourselves in the receipt or return of the payment.

Cancellations made between 30 (THIRTY) days prior of arrival will be charged 50%.

Cancellations made less than 30 (THIRTY) days before arrival 100% of the total reservation amount will be charged.

No-shows with no notice are not refundable.

If you are booking as a pair and one party withdraws the other party will be required to either find a replacement (we can help with this) or be asked to pay the entire cost of the original booking (ie two places).   We reserve the right to remove your entire booking in this case (though we’ll work hard to avoid this where we can).

Bookings will not be available through JohnScottYoga.com

For more information and to book see the Yoga in Salento website here:

Some pictures from Yoga in Salento.  With many thanks to Francesca and the team at YogaInSalento.com for the permission to include these pictures here.

The coast is nearby

Side Entrance and groves